You are here: Home / Sports / Wild skate at Boston tonight 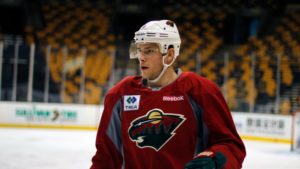 The Wild practiced in Boston yesterday (photo courtesy of Wild.com)

The Bruins finished practice Monday with only one goaltender.

And that goalie, prospect Malcolm Subban, had just arrived from Providence as the early saga of the Boston goal continued — and it appeared Subban would be in goal for Tuesday night’s home game against the Minnesota Wild.

This all started when starter Tuukka Rask missed the second game of the season, with what was called “general soreness.” He then played in both the final game of the three-game, season-opening road trip and the home opener — defeating both the Winnipeg Jets and New Jersey Devils.

But Rask said he wasn’t at one hundred percent, and Anthon Khudobin played in the 4-2 loss to the Montreal Canadiens last Saturday, with Zane McIntyre on the bench as the recalled backup.

McIntyre was sent back and Subban — 0-3-1 with a 4.50 goals against average at Providence, yielding three goals on nine shots in one — was brought up to join the team at Monday’s practice.

Then, Khudobin, expected to start Tuesday, suffered a hand or wrist injury, left the ice. One goal was “guarded” by a blue screen with holes in it for pucks.

Subban, who gave up three goals on six shots in his only NHL game two seasons ago, was the last man standing.

“If we have to make adjustments and have some new personnel, we’ll deal with it,” said coach Claude Julien, who never likes to talk about who his goalie will be in the coming game.

The Bruins, 3-2-0 heading into the finale of a three-game homestand before a four-game road trip (seven of their first 10 games are on the road), will face a Minnesota tam that picked up one of the possible four points in the New York Metropolitan Area over the weekend. 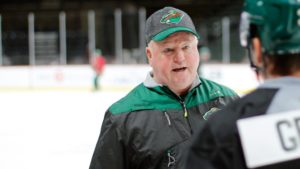 The Wild (3-2-1) have allowed at least 30 shots on goal in five of their six games and are just making too many mistakes to satisfy new coach Bruce Boudreau. They gave up six goals, one into an empty net, in Sunday night’s loss to the Islanders in Brooklyn.

“If you don’t practice the same thing over and over early, you sometimes forget, and you start playing the game like shinny,” Boudreau said after practice Monday. “We had to go over some points that I think we’re starting to get away from us and bring everything back into focus.”

The Bruins swept the two-game series from the Wild each of the last two seasons. But Boston’s home-ice troubles, which cost the Bruins a playoff spot last year, is again threatening to be a problem. The Bruins escaped with a 2-1 victory over New Jersey — Patrice Bergeron scoring the winner with 1:15 left — and then fell to the rival Canadiens.

Julien’s team, which has missed the playoffs the last two seasons, has allowed the first goal in all five games.

“I hope it’s not a habit,” the coach said Saturday. “It’s certainly not what we’re looking for. But there’s no doubt, I think it’s pretty obvious that with the amount of games we’ve played, five games, we haven’t scored first. We talked about that (Saturday) morning, trying to get that first goal, and it hasn’t happened yet.”

Darcy Kuemper was shaky in the Minnesota goal Sunday, in a game that saw Zach Parise score his 300th and 301st NHL goals.

On Kuemper’s early woes of giving up multiple goals in bunches, Boudreau, whose top goalie is Devan Dubnyk, said, “It has to stop. We’re not putting Kuemps in — not to throw him under the bus, but I mean we plan on playing him a few more games than we’ve played him in the past, so sometimes we need that superb goaltending job.”