The Wild will play 12 games in 22 days starting with road games in
Toronto, Ottawa, Montreal and Boston.

“That’s what you want is a lot of games in a short period of time,”
Wild coach Bruce Boudreau said. “That’s how you make up distance in
the standings.”

The Wild lost 3-2 to the Pittsburgh Penguins at home Monday, while
the Maple Leafs have not played since Saturday, when they were
dominated 4-0 by the New York Islanders.

The home loss to the Islanders ended a five-game winning streak, so
Toronto coach Mike Babcock could be philosophical.

The immediate concern for the Maple Leafs entering the new year is
the status of No. 1 goaltender Frederik Andersen, who is listed as
day to day with a groin injury.

Garret Sparks has started the past three games and likely will make
the start Thursday.

Andersen and left winger Zach Hyman (sprained ankle) were on the
ice before practice Wednesday morning, but neither joined the team
for the regular practice later. Babcock had said Tuesday that he
had hoped Andersen, after training on his own Tuesday, could
practice with the team Wednesday before possibly playing against
the Wild. He has not played since Dec. 22.

Hyman’s return is farther away. He was injured Dec. 18.

“(Andersen is) doing everything he can to make himself feel 100
percent for the stretch run,” Sparks said this week. “He’s been
really supportive to me, a quiet leader who lets his performance do
the talking for him. It’s been inspiring to watch up close and I
try to be as much of the same calming influence for this team.”

“We’ve got a tough schedule, with some big games on this East Coast
swing,” Wild left winger Jason Zucker told the St. Paul Pioneer
Press. “We’re going to have to figure out a way to keep playing a
style of hockey we know we can win with.” 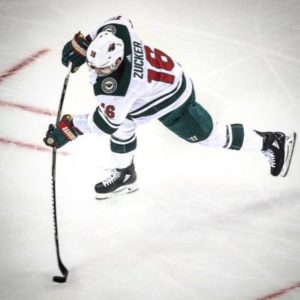 Winger Jason Zucker and the Wild visit Toronto for a 1 p.m. puck drop on Thursday afternoon

The Wild ended a five-game losing streak with a 3-1 road win over
the Winnipeg Jets on Saturday. They’ve had trouble getting goals,
scoring only 30 in a 4-8-1 December after scoring 45 goals in 13
games in November.

“That is the reality, and it is frustrating,” Boudreau said. “You
can only be positive in the next practice and build them back up
and go at it again. That’s the only thing you can do.”

“It’s the way it is for us right now,” Wild center Charlie Coyle
told the Minneapolis Star Tribune. “You get your chances, and it
doesn’t go in. Rebounds are coming out to the left of you, and
you’re going to the right. It’s just little things like that. A
bounce here or there, and it’s a different story. But we gotta stay
positive through it. We’ve gone through it before, and it’s gonna
be tough to crawl out of this. But we’ve got the team to do it, so
we know we can do it.”

Part of the Wild’s problem is that they have had only 13 power
plays in the past eight games.

The Wild recalled defenseman Ryan Murphy on Tuesday from Iowa of
the American Hockey League. He had three goals and 10 assists with
Iowa.