You are here: Home / Sports / Wild Try and Salvage Homestand

The Anaheim Ducks sank about as low as they could go over the past
two months, winning just three games in a 23-game stretch, but
thanks to lukewarm performances by the rest of the teams in the
lower half of the Western Conference standings, they remain firmly
in the playoff race.

Anaheim (23-27-9, 55 points) will head into Tuesday’s game at the
Minnesota Wild (27-26-6) just five points behind Minnesota for the
West’s second wild-card spot. The Wild have made things easier for
pursuers by losing their past four games and eight of nine.

The Ducks just completed a positive week under general manager and
new coach Bob Murray, who fired Randy Carlyle on Feb. 10 and
decided to step into the fire as interim coach. Anaheim is 2-1-0
under Murray so far, including an impressive 5-2 win against the
defending Stanley Cup champion Washington Capitals on Sunday.

“Just keep building on everything we’ve talked about the last week
or so,” said Ducks center Adam Henrique, who had two goals and an
assist against the Capitals to match his career-high point total.

Henrique’s performance was somewhat buried by Ducks goalie Ryan
Miller, who earned his 375th career win on Sunday to become the
all-time wins leader among U.S.-born goalies. Jakob Silfverberg
also scored two goals against Washington to increase his team lead
to 15, and Corey Perry scored his first goal of the season in his
eighth game back after missing the first two months of the season
following knee surgery.

The Ducks came into Sunday’s game last in the NHL in scoring after
producing nine goals in their previous nine games.

“It’s good for our team to score five goals,” said Ducks assistant
coach Marty Wilford. “Everybody knows our troubles with lack of
scoring but, hopefully, now they can start feeling good about
themselves and we can pile it on.”

The Wild hit a lull after their 14-7-2 start, but now they’re in a
free fall, going 1-5-3 in their past nine games. They lost three
straight one-goal games before a 4-0 defeat against the visiting
St. Louis Blues on Sunday. 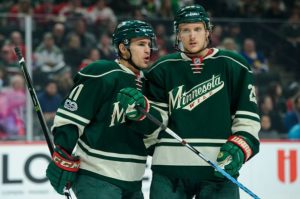 The Minnesota Wild have won just won game in February and have dropped five straight at the X.

“We’ve got to figure some stuff out because it’s getting pretty
ugly,” Wild forward Zach Parise told reporters after the loss to
St. Louis.

The Wild have struggled on special teams, particularly on the
penalty kill, allowing 14 power-play goals in the past 12 games,
but Parise also took issue with Minnesota’s effort of late.

“I just don’t feel like we’re really competing that hard,” Parise
said. “I mean, we did for a couple games, but for the most part
there’s no jam, and I don’t know why.”

The last time the Ducks visited Minnesota on Jan. 17, they brought
a franchise-record 12-game losing streak. The Wild played an
uninspired game and lost 3-0. They bounced back and won three in a
row heading into All Star weekend and their bye week, but haven’t
come out of the break with the same resolve.

“We better find it, otherwise we’re not going to get out of this
thing,” Parise said. “It’s just going to get deeper and deeper.”

Minnesota won the first meeting between the teams, a 5-1 final at
Anaheim on Nov. 9.