The Minnesota Wild came off their bye week Monday and needed awhile to get going. Despite falling behind four times, the Wild eventually earned a 5-4 overtime win against the Los Angeles Kings.

The Winnipeg Jets hope the return from their bye produces similar results when the Wild visit the MTS Centre on Tuesday.

Whether due to a trip to the tropics, a loss of focus or falling slightly out of game shape, NHL teams have fared poorly this season after their league-mandated week off at various points in the season. (Teams are each given five consecutive days without a game or practice.) 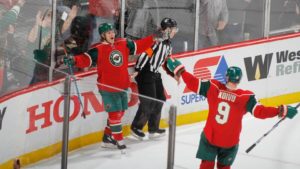 Supposedly well-rested teams have a woeful 7-13-4 in their first games back, including the Wild’s wild win over the Kings. Minnesota never led until Mikael Granlund scored 12 seconds after the faceoff to start overtime.

The Jets won three games and lost twice in overtime in their last five contests before their break, collecting eight points. But while they were idle, the teams ahead of them — notably the Calgary Flames, who are riding a four-game winning streak — pushed Winnipeg further away from a playoff spot.

Jets coach Paul Maurice is optimistic his squad will be able to avoid the post-bye-week pitfalls of most other teams this season.

“The challenges — and you look at the teams that have suffered through this — isn’t that the sharpness isn’t there or the hands aren’t there,” he said following practice on Monday. “That’s not the issue. It’s getting back to the compete — and that’s been our strength. Getting back to that, that level of competition that made us strong. That’s the big challenge for all of these teams coming out.”

While defenseman Jacob Trouba will serve the second game of a two-game suspension for an illegal hit on the Ottawa Senators’ Mark Stone, the Jets could welcome back fellow rearguard Toby Enstrom. The Swede sustained a lower-body injury on Feb. 11 that required surgery a few days later. He has missed five games while recovering.

The Wild will come to town with some new recruits, as general manager Chuck Fletcher was in the office last week. He acquired centers Martin Hanzal and Ryan White from the Arizona Coyotes in exchange for a several draft picks, including the team’s first round selection this June. White finished with a goal and an assist Monday in his Minnesota debut.

“We’re just putting our chips in the middle of the table for this year,” Fletcher said. “We think our players deserve the best chance possible to compete (for the Stanley Cup). It’s not fun trading picks. I don’t take it lightly. You can’t do this all the time. No question we paid a price.”

It’s a good thing Fletcher made his moves as both right winger Jason Pominville and left winger Zach Parise have been diagnosed with the mumps. Both are sidelined through at least Friday as part of a five-day quarantine.

This is the second time Fletcher traded a first-round pick — he sent the Wild’s 2013 first-rounder to Buffalo as part of the deal for Pominville — but this year’s draft isn’t considered to be as strong as the last two years, which yielded players such as the Edmonton Oilers’ Connor McDavid, the Toronto Maple Leafs’ Auston Matthews and the Jets’ Patrik Laine.