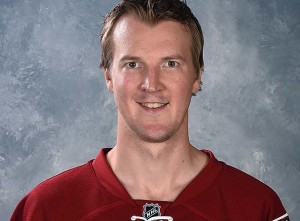 Devan Dubnyk made 38 saves for his second straight shutout and the Minnesota Wild beat the Buffalo Sabres 4-0 on Thursday night.

Ryan Suter had a goal and an assist, and Joel Ericsson Ek, Jason Zucker and Mikko Koivu also scored. The Wild went 2-1-1 on a four-game road trip to improve to 5-2-1.

Anders Nillson made 18 saves in his second straight start for the Sabres. They have lost four in a row.

Minnesota built a two-goal lead in the first period, but Buffalo controlled the action in the second. Dubnyk made 19 saves, including 15 in the first 6:11 of the period, and the Wild killed two penalties.

Suter scored his third goal of the season 2:58 into the third period, sending a wobbly wrist shot from the right circle over Nillson’s glove. Koivu added an empty-net goal with 1:09 left. 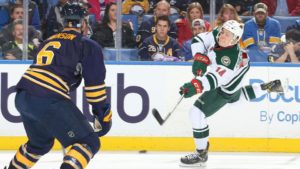 Eriksson Ek scored at 4:51 of the first period when he played the puck off the right boards to elude defenseman Jake McCabe and snapped a shot over Nillson’s left shoulder into the far corner of the net. The 19-year-old rookie has two goals and three assists in his first four games.

Zucker scored for the second straight game to make it 2-0 with 4:47 left in the first period. Taking a pass from Chris Stewart at the blue line, Zucker skated between two defenders into a breakaway and slipped a backhand beneath Nillson’s left pad.

NOTES: Minnesota D Marco Scandella went to the locker room during the first period after getting his right leg tangled up in a scrum in front of the net. … Wild D Jared Spurgeon (upper body) and F Erik Haula are both close to returning, coach Bruce Boudreau said. Spurgeon skated Thursday morning, while Haula did not. … Sabres F Evander Kane (cracked ribs) missed his fifth straight game and C Jack Eichel (ankle) remains out indefinitely. … Sabres D Rasmus Ristolainen played in his 200th NHL game on his 22nd birthday. He is the fourth-youngest player to appear in 200 games for the Sabres, according to Elias Sports Bureau. … The Wild have gotten a point from every player in the lineup this season after D Nate Prosser, D Christian Folin and Scandella each recorded their first assists.