You are here: Home / Sports / Will Gophers face Armstrong this Saturday in Nebraska? 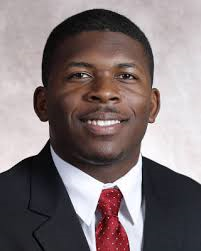 Nebraska quarterback Tommy Armstrong Jr. is going through a concussion protocol and listed day-to-day for this weekend’s home game against Minnesota.

Coach Mike Riley said Monday that if Armstrong isn’t cleared to play by Thursday or Friday, Ryker Fyfe would be the starter and Zack Darlington would be his backup.

Armstrong’s head hit the turf hard when he was tackled along the Ohio State sideline by safety Malik Hooker in the second quarter of Saturday night’s 62-3 loss in Columbus, Ohio. Medics tended to Armstrong on the field for about 10 minutes before he was taken to a hospital to be evaluated. Armstrong returned to Ohio Stadium in the second half and joined his teammates on the sideline.

Riley said he’s encouraged because Armstrong has said he feels good. But before Armstrong can play, he will have to pass a series of neurological tests showing he has regained normal cognitive and physical functions.

Armstrong and Fyfe did not appear for interviews at the team’s weekly media availability.

Receiver Jordan Westerkamp, Armstrong’s longtime roommate, said Armstrong was doing well after what initially appeared to be a scary injury. Armstrong, on a stretcher with his neck braced, gave a thumbs-up to the crowd as he was transported to an ambulance. Westerkamp said he was relieved when Armstrong was shown on the video board walking back into the stadium.

”It was awesome to see that and that he was OK,” Westerkamp said. ”We thought it was pretty serious at first. It’s a bunch of precautionary stuff with the head and back. They have to do that kind of stuff. It was great to get him back.”

Minnesota (7-2, 4-2 Big Ten) controls its destiny in the West Division race. If the Gophers win their last three regular-season games, they’ll go to the Big Ten championship game for the first time. No. 21 Nebraska (7-2, 4-2) needs to win out and have Wisconsin lose at least once to make it to Indianapolis on Dec. 3.

Fyfe was 5 of 18 for 52 yards and an interception after he took over for Armstrong at Ohio State. Through the first eight games, Fyfe had played one snap against Oregon as Armstrong was treated for cramps, two series against Wyoming and one series against Fresno State.

”We’ve been in so many close games into the second half, it’s too bad we didn’t get him in more often,” Riley said. ”I believe he’s always well-prepared. I really like his ability. Given the chance to play, he will perform and do a nice job. Our team has faith in him. I think if that’s the way we end up going, I think Ryker will do a good job for us and help us win the game.”

Fyfe has appeared in 14 games in his career and made one start, that being the 55-45 loss at Purdue in 2015. Fyfe threw four interceptions and lost a fumble in that game.

Darlington, recruited by Nebraska as a quarterback, moved to receiver this past spring and in the fall won the holder’s job. Riley said Darlington went to see him Sunday to volunteer to play quarterback.

Riley said he has no plans to take freshman Patrick O’Brien out of his redshirt.

”We know we have to be prepared for anything that might happen,” Riley said. ”That’s why he’s traveled and practiced from time to time with our team and stayed well prepared.”

NOTES: Linebackers Dedrick Young (ankle), Marcus Newby (hamstring), Michael Rose-Ivey (elbow) and Chris Weber (knee) came out of the Ohio State game nursing injuries. … Riley said offensive linemen Tanner Farmer (ankle) and David Knevel (ankle) are getting closer to returning. … Offensive lineman Jerald Foster, who was expected to be out for the season after having knee surgery in August, could be able play some in the next couple weeks.