You are here: Home / News / Willmar woman attacked by pitbull 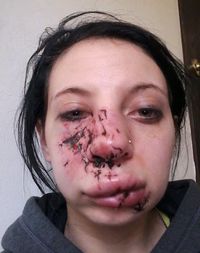 A dog was taken to the Hawk Creek Animal Shelter in Willmar after a Sunday night biting incident.   Willmar Police Captain Mike Anderson says police were called to a convenience store on Southwest Litchfield Avenue at 11:26 p.m. regarding a dog bite.  When officers arrived they found a 23-year-old Willmar woman holding a bloody towel to her face and several lacerations, which she said came from a friend’s dog, a pitbull.  The victim was a clerk at the store and says she was just beginning her shift when the dog, which she was familiar with,  bit her on the face.   She says the dog would not let go, and it went on for about 2 minutes.   The dog owner, 27-year-old Joshua Norton, and the dog were there when police arrived.    The victim was treated at the Rice Memorial Hospital Emergency Room and released, suffering wounds to the lip, nose and cheek.   The dog was taken to Hawk Creek, according to city ordinance, and will remain there until the investigation of the bite is complete and it is determined whether it is to be considered a danger to the public.   Thanks to MNN Affiliate KWLM.