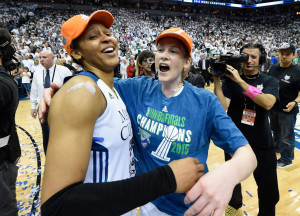 After finishing the three-game sweep of the Phoenix Mercury with Sunday’s 82-67 win to advance to the WNBA Finals for the fifth time in the last six seasons, the Minnesota Lynx will host Game 1 of the WNBA Finals presented by Verizon on Sunday, October 9 at Target Center at 2 p.m. against the Los Angeles Sparks.

The entire schedule for the best-of-five WNBA Finals presented by Verizon is as follows:

Minnesota finished 2-1 against the Sparks this season. The teams’ first meeting of the regular season (Minnesota 12-0 & LA 11-0) was a historic one as it was the first meeting in American professional sports league, including the NBA, MLB, NHL and NFL, that featured two teams with at least 10 wins and zero losses or ties.

The Lynx (28-6) set a franchise record with 28 wins in a season, equaling the second-highest total in WNBA history. The Lynx finished 15-2 at Target Center, winning their last 10 in a row, the third longest home winning streak in club history. Minnesota completed its road portion with a 13-4 record, tying the franchise and WNBA record for road wins in a season and marking the sixth consecutive season they’ve finished with a winning record on the road, which is the longest such run of success in league history.

Minnesota has put together 155 regular season wins since 2011, which is the most-prolific six-year haul in WNBA history. This season marks the third season the Lynx have put together 27+ wins, becoming the first team in WNBA history to win 27+ games in three separate seasons and sixth consecutive season with 20+ wins. The Lynx finished 2016 with a 15-1 record vs. Western Conference rivals, winning all eight road games, becoming the first team in WNBA history to go through a season unbeaten on the road against the Western Conference. They are also just the third team ever to complete a full season with only one loss to Western Conference opponents, joining Houston (16-1 in 1998) and Los Angeles (19-1 in 2001).

Single-game tickets for all home games went on sale yesterday and can be purchased on lynxbasketball.com/tickets. For Game One, the first 10,000 fans in attendance will receive a free Lynx WNBA Finals t-shirt.