His presence and approach were missing from the Minnesota sideline Thursday night during the Vikings’ 17-15 loss to the Dallas Cowboys.

Zimmer had emergency eye surgery Wednesday night for a detached retina, leaving special teams coordinator Mike Priefer to fill in as the head coach on Thursday. The loss of their coach, and the fire and energy he brings, was felt by the Vikings. 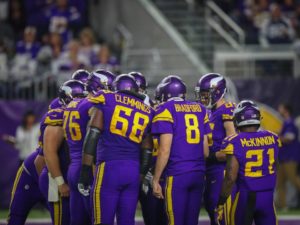 “It was sad because we know how bad these games mean to him, and the game of football, period,” cornerback Captain Munnerlyn said. “He eat, sleep, drink football. This is a guy who really wanted to be here tonight for us.

“For him not to be here, we know it probably kind of hurt him a little bit. At the same time, he got to take care of his health and be ready to roll when he can go.”

Zimmer was at home resting. An NFL Network report said Zimmer was unable to watch the game. He had to listen to it on the radio. Zimmer did speak with the team earlier in the day.

“We love that man,” defensive end Brian Robison said. “He puts his heart and soul in this team, and we give it right back to him. I think this team handled it very well. I think we put everything we had on the line. At the end of the day. we’ve got to find a way to get it done, and we just didn’t.”

“He has an imprint on everything that we do, offense, defense and special teams,” Priefer said. “It was really tough to see his emotion knowing that he wouldn’t be there with the team tonight. It was a little bit hard for me, because he’s such a competitor. That’s why I love working for him.”

Zimmer received his first head coaching job in 2014 with Minnesota after many years of being passed over. The Vikings improved from 5-10-1 in 2013 to 7-9 in Zimmer’s first season. A year later, Minnesota went 11-5 and won the NFC North.

The Vikings opened 5-0 this season, but the defeat against Dallas was Minnesota’s sixth setback in the past seven games. Zimmer’s defense still entered the night allowing the second-fewest points and third-fewest yards in the NFL.

The team hasn’t announced when Zimmer will be able to return. Priefer said Zimmer has a follow-up appointment on Friday. Priefer, who was in consideration for the Chicago Bears’ head coaching position in 2013, said he didn’t find out he would lead the team until Wednesday night.

Priefer added that he is ready to fill in again, if needed, but hopes Zimmer returns soon.

“I think you kind of, hopefully, have been preparing your whole career, learning, understanding the game,” Priefer said about preparing for Thursday’s opportunity. “I appreciate what (general manager Rick Spielman) and Coach Zimmer did, giving me this opportunity to help our football team win tonight. Obviously, I didn’t do my part, and we didn’t get it done.”

Priefer says Zimmer met with the team in the morning on Thursday and had a simple, yet emotional message:

“There’s definitely been a lot of stuff,” Munnerlyn said. “At the same time, ain’t nobody in the NFL going to make excuses for us. The league still going to move on. So, we got to find a way to win these games and try to get better.”