You are here: Home / Sports / Zimmer wants it LOUD in new stadium on Sunday 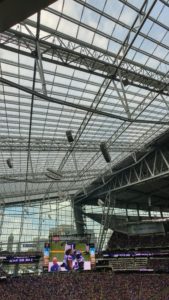 The Minnesota Vikings sought an innovative and unique look for their new stadium that could be instantly recognized on national television.

To receive public funding, the place needed to be covered, and a retractable roof option was passed over for a translucent cover. It’s more cost-efficient and can make the interior almost feel like the outdoors when coupled with the top-to-bottom glass front of the asymmetrical, ship-shaped building.

As the construction process unfolded, the Vikings learned that their preferred design came with quite the benefit.

The see-through plastic panels that account for 60 percent of the roof, a space-age material called ethylene tetraflouroethylene or ETFE, are considered more acoustically reflective than the Teflon cover over the old Metrodome. The Vikings enjoyed a significant edge during their 32 seasons in that stadium, often thriving off the sounds of an amped-up crowd that reverberated off the ceiling.

Now, at U.S. Bank Stadium, the capacity is a bit larger at 66,000 seats. The angle of the roof could also tilt more of the noise toward the visiting team benches. The seats and suites are the closest to the action of any venue in the NFL, at 41 feet and 25 feet from the sidelines, respectively. 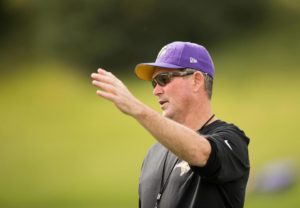 ”I’d like it to be extremely loud,” Vikings coach Mike Zimmer said. ”It’s always a chance for home-field advantage for us, so that’s what I’m hoping for.”

The Vikings will play their first regular-season game on Sunday night against Green Bay. The prime-time contest against the archrival Packers will already have the fans revved up, and the magnitude of the had-to-be-there moment of a stadium’s first real game can only enhance the environment. Factor in the aforementioned physics of the building material, and the potential for ringing ears into the next day is clear.

”It’s going to be out of control. Lights out. I expect nothing less,” Vikings left guard Alex Boone said. ”The electricity is probably going to be through the roof.”

That will certainly be a challenge for the opponent.

”The Metrodome, as far as the uniqueness of the noise level that you’ve dealt with over the years, I think has given us a pretty good gauge or standard of what the expectation should be,” Green Bay coach Mike McCarthy said.

The Packers accused the Vikings in the past of artificially enhancing the Metrodome atmosphere with piped-in noise through the stadium speakers to supplement the actual screaming of the fans. Fair or not, fact or fiction, such a trick was hardly necessary then and especially won’t be now.

”I think early in the game, it’s going to be tough to hear anything,” Packers quarterback Aaron Rodgers said. ”You know on the road we like to use a silent count like all teams do, and you just have to figure out those opportunities when you can use your verbal checks and stuff.”

After two years outside at the University of Minnesota’s TCF Bank Stadium, where the franchise record for the coldest game in Vikings history was set in the playoffs in January with a kickoff temperature of minus-6 degrees, the Vikings will field a team well-suited for the new place. The players, of course, will relish the bells and whistles of the $1.1 billion building to call their own.

Their run-oriented offense supported by reigning NFL rushing leader Adrian Peterson is the kind of scheme that fits well in the natural elements. A passing attack that has lagged for several years can only benefit from the controlled climate. Kicker Blair Walsh, who missed the last-second 27-yard field goal in a one-point defeat by Seattle on that frigid January day, ought to get a boost from the neutral conditions.

Then there’s the defense that has been ascending under Zimmer toward one of the stingiest in the league. 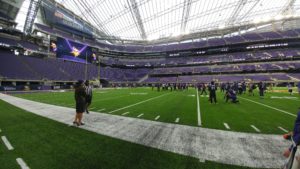 ”If you’re indoors and it’s loud, I think that’s a big advantage for a pass rush because they’re going on silent cadence and they’re not getting double cadence and all that stuff,” Zimmer said.

The potential for jet-engine-like decibel levels is high enough that Dr. David Geddes, an audiologist at HealthPartners clinics in the Twin Cities area, wrote tips and warnings for ear protection for fans in an article posted last month on the health care provider’s website.

”Force from loud sound vibrations can damage tiny cells inside your ear,” Geddes said. ”Damage to these hair cells cannot be reversed, so the key is to use hearing protection to prevent damage. One-third of permanent hearing loss is preventable.”

The only damage sought at the stadium by the Vikings, of course, will be to the won-loss record of their opponents.

”The louder they are,” Zimmer said, ”the more it’ll help us.”

That comes with a caveat, though.