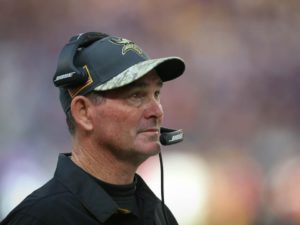 Minnesota Vikings head coach Mike Zimmer will not coach Thursday night after a third eye surgery in 30 days to repair a detached retina in his right eye.

“The most important thing is the concern for coach Zimmer and his health,” Spielman said Thursday morning on a national conference call. “Last night after we had a walkthrough practice in the afternoon his vision became worse. Last night he went under emergency surgery for a detached retina, which I know everyone knows about.

“After this morning’s appointment, coach Zimmer will not be coaching tonight. We felt this was the best interest of his health.”

Zimmer had a torn retina in his right eye repaired following an Oct. 31 game at Chicago. He required a second surgery Nov. 8. Long-term concerns are a major factor, Spielman said, but Zimmer wanted to be on the sideline Thursday.

“It’s unfortunate this incident happened last night before a game today,” Spielman said. “The surgery last night was a little more significant. We have to see how his eye responds. I do know how intense coach Zimmer is. Talking with him today and with the doctors, it’s in his best interest to make sure he gets this taken care of.”

Spielman said after numerous conversations with Zimmer and Priefer, the decision was made to allow the team’s coordinators to focus on their existing roles. Spielman was scheduled to inform players after a walkthrough Thursday morning.

“This morning I think Mike finally realized how serious the situation is,” Spielman said.

Spielman said the Vikings are looking out for the long-term of Zimmer’s health. He plans to be resting at home rather than attending the game.

“I have the utmost confidence – coach Zimmer prepared the team to play tonight, he was at every practice,” Spielman said. “They’ll be ready to go. We’re ready to play.”