You are here: Home / Sports / Zimmer won’t get into detail on QB

Coach Mike Zimmer has kept up his silence about Bridgewater’s status.

Bridgewater threw a few dozen short and medium-length passes in practice Tuesday, for the first time in front of reporters in a week. He didn’t play in the preseason game at Seattle, and Zimmer has refused to discuss the injury. ESPN.com previously reported the shoulder problem, which Zimmer didn’t confirm or deny.

”I told you guys when I first got here I would try to be as transparent and honest as I can. I will be, but there are certain things that I’m not going to tell you, and if he had an issue with his shoulder then I’m going to make sure that I err on the side of caution,” Zimmer said. ”Because if I played him and he got hurt, you guys would be killing me in the press. So I’m always going to protect the players. I’m going to do what I think is best for the organization, and you’re going to have to respect that.” 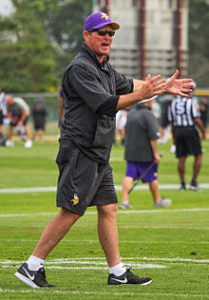 The curt, lecturing tone was aimed at the media members gathered for his post-practice news conference, but the irritant for Zimmer could well be rooted in concern about the health and depth of his quarterbacks.

Bridgewater was in full pads during weekend practices, but he didn’t attempt any passes. Backup Shaun Hill was also held out of those workouts, before returning to action Tuesday. Taylor Heinicke, the third-stringer last year, has been on the non-football injury list because of a severed tendon in his left foot. He was spotted Tuesday without a walking boot for the first time since training camp began.

Undrafted rookie Joel Stave’s production as a passer at Wisconsin was unremarkable, but he’d been taking turns with the first team in recent days. Brad Sorenson was signed Saturday to give the Vikings another arm, but he didn’t even have his name sewn onto the back of his red jersey yet.

This was originally slated as an off day for the players, but Zimmer switched the schedule to give them a break on Monday instead.

”I felt like the team was tired and they needed some time to get away,” he said.

The Vikings host San Diego on Sunday, the first game at U.S. Bank Stadium. Zimmer dismissed the importance of getting Bridgewater some snaps to stay sharp.

”He’s played an awful lot of games,” Zimmer said. ”It’s not like he’s a first-year rookie.”

The offense would only benefit from Bridgewater’s presence, though, and vice versa.

”We look to him as our leader, but we know that in this league with injury, people are not going to be out there sometimes,” wide receiver Charles Johnson said. ”So we have guys on our offensive side and defensive side who have to step up and maintain that leadership role.”

Albeit a position of far less significance, tight ends are in ample supply for the Vikings.

Rhett Ellison returned to action Tuesday for the first time since tearing the patellar tendon in his right knee in the last game of the 2015 regular season. He was a little ahead of schedule on his rehabilitation. With Kyle Rudolph, Mycole Pruitt and rookie David Morgan, there’s a probability the Vikings will keep four tight ends on the 53-man roster once it’s established Sept. 3.

”Rhett’s worked extremely hard,” Zimmer said. ”Rhett is a great kid, team guy through and through. It’s nice to get him back on the field.”