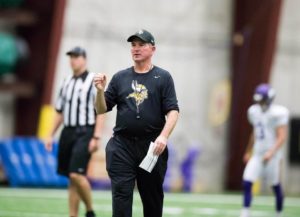 Minnesota coach Mike Zimmer wants to keep the Tennessee Titans guessing about who will start for the Vikings at quarterback when the two teams meet in the season opener on Sunday.

Titans coach Mike Mularkey thinks he has a pretty good idea who will be under center.

Zimmer declined to announce a starter on Wednesday, saying he will see how veteran backup Shaun Hill and recently acquired Sam Bradford perform in practice this week before making a decision. And even after he does decide, the coach said he would not reveal the answer until just before kickoff in Nashville.

”I thought we’d run the single wing this week,” Zimmer deadpanned, alluding to a long outdated offensive scheme that relies solely on running the ball.

The 36-year-old Hill is in his second season in Norv Turner’s offense and clearly has the edge when it comes to familiarity with the scheme and the receivers running the routes. Bradford was acquired in a trade from Philadelphia on Saturday to give the Vikings another option after starter Teddy Bridgewater went down with a major knee injury in practice last week.

The Vikings gave the Eagles a first-round draft pick and a conditional fourth-round pick that could be even higher depending on where the Vikings finish in 2016. That kind of investment leads Mularkey to believe that the Titans will be seeing Bradford start the opener.

”He’s a very intelligent quarterback and he’s faced this defense before,” Mularkey said. ”They wouldn’t give up a 1 and a 4 to have a guy sit very long. I just think that he gives them a very good chance.”

Bradford has been cramming since he arrived in the Twin Cities on Saturday in hopes of being ready to start Week 1 for a team that entered training camp with Super Bowl aspirations. Bradford wanted a chance like this after watching the Eagles grab quarterback Carson Wentz with the No. 2 overall pick in the spring.

”Just going through things, obviously getting some reps at practice, I just feel much more comfortable now than I did obviously when I got here and was on the field really the next day,” Bradford said. 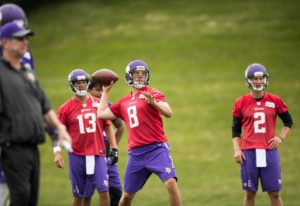 Bradford and Hill planned to split the practice repetitions with the starting offense this week. The two were teammates with the Rams in 2014, when Hill had to step in for an injured Bradford and start seven games.

This time around, it could be Bradford taking a job that Hill seemed to be in line for when Bridgewater went down in practice on Aug. 30. In the matter of three days, Hill went from perhaps getting the last chance in his career to be the No. 1 quarterback to the presumed backup after the Vikings landed Bradford, a former No. 1 overall draft choice. Zimmer informed Hill of the trade on Saturday morning.

”I would call it more of a shock. I was a little bit surprised,” Hill said. ”That can’t affect and it doesn’t affect the way I approach my profession.”

When asked how he could feel surprised in this day and age of social media and nonstop coverage of the league, Hill said, ”I don’t read anything you guys write. I don’t turn on the television other than Disney Junior for my kids. So unless it’s scrolling across the bottom of that, then I’m probably not going to see it. I try to stay below the radar on all that stuff.”

The two grew to be fast friends while playing together in St. Louis, which has helped Bradford make a smooth transition to Minnesota. And even though the writing appears to be on the wall that Bradford will eventually take over the Vikings offense, whether it is this week in Tennessee or sometime soon after, that hasn’t stopped Hill from making it clear that he would like to win the job.

”I look at everything as a competition. Every single thing,” Hill said. ”And every player in here does, otherwise you’ll get left behind pretty quickly.”